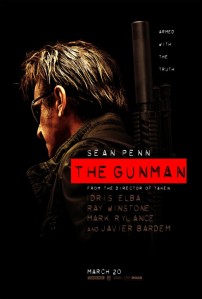 Synopsis: A sniper on a mercenary assassination team kills the minister of mines of the Congo. Terrier’s successful kill shot forces him into hiding Returning to the Congo years later, he becomes the target of a hit squad himself.

Based off the novel “The Prone Gunman” by Jean-Patrick Manchette, director Pierre Morel, who arguably, rejuvenated Liam Neeson’s career with Taken tries to do same here with Sean Penn. The Gunman takes some of the same elements from Taken but fails a little short of getting to Taken’s level.

While in Congo, a group of humanitarians try to do the best they can during a mining crises, little do some of them know, there are a few of them like Jim Terrier (Penn), Felix (Bardem) and Cox (Rylance) that have their own mission. Jim ends up killing a top official and, per orders, is told to leave the continent leaving his life behind and the love of his life Annie (Trinca) without a word. Jump to eight years later, Jim is back in Congo to do real good and build wells for the villages, until three men come to kill him specifically. Jim jumps into action, kills the men and then leaves looking for answers.

It’s interesting how the film is structured. If you walked in not seeing any of the ads you would think you are going to watch a political thriller/drama with the way the film opens with news broadcasts telling us what the Congo is going through. Not that it really matters, the film is not a commentary or trying to give us a message, in fact the Congo stuff is an overall problem for Jim, but we only spend the first twenty minutes of the film in it. Not that it really matters anyway right? You’re probably watching the film for the action.

Speaking of the action, excluding Jim taking on the three assassins at the beginning, it takes a while for the action to pick up. In fact, after Jim finds out why he’s being targeted – and when the film starts picking up steam – the action scenes come more often, and some of them don’t disappoint. A house shootout and a fight between Jim and one of the baddies are the highlights of the action scenes in the film.

So you’re probably wondering if Sean Penn could pull off being the aging Hollywood star/action star. Well the quick answer is, yes, yes he can. Penn nails a ruthless demeanor and brings the sense that this character knows his stuff and is someone you do not want to piss off. Penn even beefed up for the role, to the point that I think he demanded shirtless scenes or shots that showed up his physic, because holy cow was he buff. I will admit though, after the third shirtless scene, it got a little distracting.

The supporting cast is okay at best. The film does belong to Penn, but it is kind of a shame that the supporting cast is either underutilized or just bland, which is a shame because they are great talents. Trinca playing Annie doesn’t do much for the story expect being Jim’s way of having a better life, constantly needed to be protected or saved. Also, for a film being rated R, they never actually show her naked. I don’t want that to sound pervy, but there are moments where Annie is shirtless or is about to put clothing on and any other film would have shown the actress’s breasts, but Morel doesn’t, which I do tip my hat to him for it, but it is very noticeable in where it looks like the camera tilts up right away, another distraction.

Bardem’s Felix is a bit odd, I won’t spoil it obviously, but you can clearly tell his character is a bit slimly. Ray Winstone plays the only friend to Jim, Stanley, which against is heavily underused. Finally Idris Elba pops up as a mystery character, which is easily the most underused, although he does have a great scene with Penn before the last act of the film.

All in all, The Gunman has a strong lead with Penn who delivers some descent actions scenes and scenes that really suck you in. However, it does take a bit to really find its footing and even stumbles at times. Nonetheless, The Gunman will be sure to you entertain you in some way.