Synopsis: Captain Jack Sparrow searches for the Trident of Poseidon.

*Reviewer Note 2: There is a post-credit scene.*

The Pirates of the Caribbean franchise has been an interesting one for me. I really enjoyed the first film, the second film was okay for what it was and the third film felt like it was an hour too long – I don’t even acknowledge the last film. So, when Dead Men Tell No Tales was announced I was a little hesitant about watching it. But, then they released the first teaser and I loved it. It gave me some faith for the new film. Now after watching it, I was kind of right. Dead Men Tell No Tales isn’t a return to form, but it does make some of the right steps to bring it back.

The film starts off with a young Henry Turner, the son of Will Turner (Orlando Bloom), who goes out every night to find his father and tell him he’s going to find a way to break his father’s curse. The only way to do that is to find the Trident of Poseidon, which is said to give the bearer total control of the seas. We skip forward in time and find out someone else besides Henry (Brenton Thwaites) is trying to find the Trident in Carina Smyth (Kaya Scodelario), an accused witch – who’s really an astronomer. However, their search for the Trident gets them mixed up with the undead Captain Salazar (Javier Bardem) who has been broken free of his confinement and Captain Barbosa (Geoffrey Rush), who is once again a pirate trotting the seas with his new crew collecting treasure. Of course, all of them have one person in common: Captain Jack Sparrow (Johnny Depp).

Dead Men Tell No Tales feels like the first film. There’s a blooming romance between Henry and Carina, although it doesn’t help that Thwaites isn’t a great lead actor. Also, the film makes sure that Johnny Depp isn’t the main character – sure he’s the big name of the film and Jack Sparrow has become a pop culture figure, but Jack wasn’t the real lead in the Pirates films, it was who he was following – another reason why Stranger Tides didn’t work. Speaking of Depp’s Jack Sparrow, he’s essentially become a parody of what the character was from the first film which is a shame because his character doesn’t really add anything to the franchise anymore and comes off as a bit annoying. Although, the name of Captain Jack Sparrow is essentially what it’s become in the movie – a revered pirate is nothing more than a drunk, selfish lowlife that is a shell of his former self.

The rest of the cast is fine with Javier Bardem playing a fine villain, who is dead because of Jack before he became the infamous pirate we saw in Curse of the Black Pearl. Geoffrey Rush is always having fun playing Barbosa, but he gets to add some of his more dramatic chops and is also involved in a shoehorned in storyline that could have been more effective if it was touched on earlier than it was. Orlando Bloom and Keira Knightley do appear in glorified cameos that don’t really add anything to the story, other than Bloom’s scene with a young Henry.

Pirates of the Caribbean: Dead Men Tell No Tales 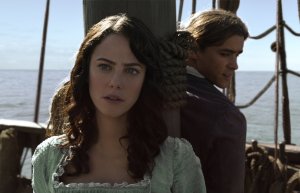