Synopsis: The Rebellion makes a risky move to steal the plans for the Death Star, setting up the epic sage to follow.

When it was announced that Lucasfilm would start doing spinoff/standalone films, many fans were excited about the endless possibilities that would entail. Then it was announced that we would be getting a prequel to Star Wars IV – A New Hope, that would follow the rebels we read about in the opening crawl that stole the plans to the Death Star. Fans were eager to see how that story played out, and then everything started coming together. The cast was put together, the director, and then the trailers were released. Everyone seemed pretty happy. Then the dreaded and new dirty word in Hollywood came out, reshoots. Even though everyone in the production said it wasn’t too big of a deal, fans started to worry. Well, it looks like we didn’t need to, because Rogue One: A Star Wars Story delivered on its early promise – a war film about the brave group of rebels that stole the plans to The Empire’s deadly weapon.

The film doesn’t start off with the traditional Star Wars opening crawl, and instead starts with Imperial Director Orson Krennic (Ben Mendelsohn) getting a former Empire scientist, Galen Erso (Mads Mikkelsen) to come back to work on the Empire’s newest weapon. Before they can capture him however, Galen sends his daughter Jyn off to hide. We skip forward years, and an adult Jyn (Felicity Jones) is held by Imperial forces until she is saved by the Rebellion. There she meets an intelligence officer in Cassian Andor (Diego Luna) and a re-programmed Imperial droid K-2SO (motion capture and voiced by Alan Tudyk) where they offer her freedom in exchange to help them get a message from her father that is being held by an old mentor, Saw Gerrera (Forest Whitaker) and a defector pilot Bodbi Rook (Riz Ahmed). Along their journey they recruit former Jedi temple protectors Chirrut Imwe (Donnie Yen) and Baze Malbus (Jiang Wen) to help them on their mission that becomes something bigger than they thought: save the galaxy from the Death Star, and steals the plans to help the Rebellion.

Rogue One is the first of new standalone/spinoff films, and if this is any indication on how Lucasfilm and Disney are going to handle the films, I think we are all in for a fun ride and great films. While the film does hark on some elements that we all love about Star Wars, the film feels different in a lot of ways too. While the previous Star Wars films have some “dark” overtones, Rogue One does feels more like an actual war film.

The whole film is essentially a race against the clock that sees our characters jump from one planet to the other to get vital pieces of information, and trying to stay ahead of the Empire and Krennic. What also helps is the action is extremely top-notch. Sure we remember all the lightsaber battles and sky battles from the previous films, but what we’ve never really seen the ground troops, and the dirty side of the war that is finally introduced giving us a different side of the rebellion. Not only that, there is no Jedi in the film, sure we go to the home planet of the Jedi, but the closest thing we get Jedi is Donnie Yen’s character and the appearance of Darth Vader. So if you think Star Wars films need Jedi, Rogue One will prove you wrong.

Besides the action, the characters are what also make Rogue One a great and fun film. Felicity Jones’ Jyn is a great character to follow, who eventually accepts her place in the rebellion to stop the Empire, Luna’s character is complex in his own way that makes total sense now that we get a wider and better look at the Rebellion. Donnie Yen and Jiang Wen are a likeable duo with Yen being a major highlight for me – and will be for fans of his. Riz Ahmed’s Bodbi is unfortunately underdeveloped, but does have his moments, while Ben Mendelsohn’s continues to be reliable in everything he does as his Krennic is a worthy Imperial officer villain, although I wish they would have done more with him. They do involve him in a small arc with a character many Star Wars fans will know, and although I want to talk about that, I think I’ll let you experience that yourselves. The highlight of the film is Alan Tudyk’s K-2SO, who brings most of the humor to the film, and will probably go down as people’s newest favorite droid. 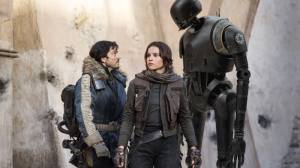 The film does have some issues. Like I mentioned, some characters just don’t have enough to do or are underdeveloped, and some plot lines are pretty thin or aren’t fleshed out enough that we’re left wondering why bring this up? It also takes a while to really pick up, but once it does, oh man, is it totally worth it and sucks you in completely. I also had just one minor issue with one Vader scene, but we can talk about that some other time.

All in all, Rogue One: A Star Wars Story is a great film to the Star Wars series. While the film has a few missteps, and the fear that reshoots would ruin the film, Rogue One is a hell of a lot of fun for new and seasoned fans.

Rogue One: A Star Wars Story