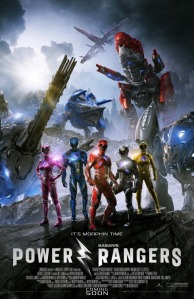 Synopsis: A group of high-school kids, who are infused with unique superpowers, harness their abilities in order to save the world.

*Reviewer Note 2: There is a post-credit scene.*

Like mostly every incarnation of the heroes, the film follows five teenagers who are misfits in their own way. There’s Jason (Dacre Montgomery), a now former football star who gets into an accident at the beginning of the film ruining the school’s chances of a championship; Billy (RJ Cyler), who is mildly autistic in this version; Kimberly, the popular one who now finds herself outside her popularity; Zack (Ludi Lin), who is a bit of an adrenaline junkie and is a caregiver for his mother; and Trini (Becky G), the new girl who doesn’t fit in with her “normal” parents. 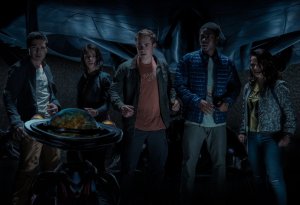 One night all of them come together, by chance, and find mysterious colored coins which end up giving them special abilities. When they go back to the site they found the coins, they find an abandoned spaceship where they meet the android Alpha 5 (voiced by Bill Hader) and Zordon (Bryan Cranston), who tells them they have been chosen to be the Power Rangers. Moreover, they have to train because the evil force of Rita Repulsa (Elizabeth Banks) has risen again and is in search of the powerful Zeo Crystals to destroy the world.

Power Rangers takes the basic premise of the first series – well, the American one anyway – and pulls concepts from other incarnations to reboot the whole thing and make it more modern and change the mythology we all know and love, which surprisingly works. The film feels like a mix of The Breakfast Club and Chronicle, but the story and characters stand on their own. Sure they have to save the world, but the characters try to find themselves amongst strangers, a mysterious head in a wall and a weird looking robot. Their journey is what keeps us engaged until we see them suit up. It’s a story that we can probably all connect to in our own way, but it’s the cast that makes it worth it.

For a group of relative unknowns, they did an awesome job making us by their characters. Dacre Montgomery’s Jason isn’t the typical jock although buying him as the leader was a little hard to buy at first, Naomi Scott’s Kimberly isn’t the Kimberly we all remember but carries something with her, Ludi Lin’s Zack is completely different from what we remember, but the caretaker aspect is an interesting one, Becky G’s Trini is the much talked about LGBTQ character, and while I was turned off by her attitude at first, she grew on me as the film went on. RJ Cyler’s Billy will undoubtedly be a fan favorite, and arguably is the heart of the film along with Bill Hader’s Alpha 5, which design is much better and less distracting once you see it move around. Bryan Cranston’s Zordon is perfect, but it’s Elizabeth Banks who fails on some levels. While she’s a bit of wildcard in terms of you never know what she’s going to do, she doesn’t really feel like a villain until the end. It’s nothing against Banks herself, but her Rita was just a little underwhelming for me. Oh, and Goldar is, well, he’s what we see in the trailers.

The film’s tone is also great. It’s got the right amount of cheesiness, humor, coming-of-age style and realness a new modern version Power Rangers needed. Sometimes the tone can be all over the place, but overall it’s pretty spot on. One scene, that is a great scene, but it came at a weird place is when the team start to really get to know each other. One complaint I know many will have is the amount of time the group have in the actual Ranger suits. It doesn’t come until the final act of the film, but I would say the team does deserve to earn the suits, which makes the wait for it to actually happen worth it.

All in all, Power Rangers is a great film for fans of the Power Rangers. The cast is great, the tone is spot on for the majority of the film along with the cheesiness the film needs. Also, for a film that is over two hours, it went by like a breeze. It’s also a great way to introduce new fans to the group of heroes we all loved as kids – and maybe even still to this day. It’s morphin’ time!