Synopsis: After getting in a car accident, a woman is held in a shelter by two men, who claim the outside world is affected by a widespread chemical attack.

Produced by J.J. Abrams under his Bad Robot production banner, 10 Cloverfield Lane snuck up on pretty much everyone. It wasn’t until January that Abrams put out that the film to the formerly titled film Valencia – also formerly titled The Cellar – has turned into a “blood relative” to Cloverfield, a film that he also produced, that some people wanted a sequel to for a while. Now the film is here and all the secrecy has paid off, because damn, is 10 Cloverfield Lane is pretty good.

The film follows Michelle (Winstead), who is on her way out of town when he gets suddenly struck off the road. When she wakes up, she sees that she’s chained up to the wall of a cellar that is owned by Howard (Goodman). Howard promises Michelle that he saved her and everyone outside the bunker is dead or effected by the air that’s been contaminated. Also inside the bunker is Emmett, who has a connection with Howard and the bunker of his own. The question becomes is any of it true? And can Howard be trusted?

Again, 10 Cloverfield Lane wasn’t always a “blood relative” to Cloverfield. It wasn’t until the late stages of filming that producer J.J. Abrams and the writers decide to bring it within the world that was established in Cloverfield. While not being a completely sequel, the end of the film is really where the Cloverfield elements start to kick in. I’m sure the last act will divide fans no matter what. However, despite what you feel about the last act, there is no doubting that everything before works to the fullest effect.

The reason it works so well is the cast which is limited to only three people, Mary Elizabeth Winstead, John Goodman and John Gallagher Jr. All three of them have their fair share of big moments in the film, but arguably it’s Goodman’s Howard that makes the film work. If – for some reason – you forgot how great John Goodman is, this will remind you how great he is. Goodman’s Howard never lets up and is the only constant that keeps you on your toes. Not only is he physically imposing, but has moments that make him absolutely terrifying in his own way. 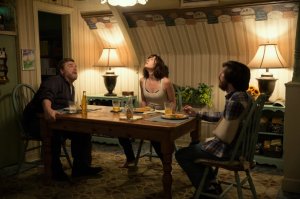 Gallagher Jr. and Winstead may be overlooked because of Goodman performance, but they are equally great in their roles. Winstead’s arc really does take the whole film to come full circle, but it’s done in a beautiful and reasonable way. Gallagher Jr. has a standout scene as he describes what his life was before the “attack.” Another “character” is the bunker itself. It has a roomy and warm feeling, but it is so confined and claustrophobic other times that it makes you feel uneasy just watching the characters walk around.

10 Cloverfield Lane isn’t a horror film, despite the level of secrecy and threat of a huge monster like the one in Cloverfield. The film is really more of a suspense drama thriller for the most part, and even when the Cloverfield connection comes into play, the suspense aspect stays in play with a touch of horror, but not flow blown enough that ruins what was done before. More importantly, 10 Cloverfield Lane is also a character-driven film. All the actions done in the film are by the characters and the situation they are in, which of course is heighten even more by the uncertainty of the outside world. Is Howard really telling the truth about the air outside? Or is something more going on? Those questions are answered until the very end, and what the writers and director Dan Trachtenberg – kudos to him too for keeping everything together – were able to do keep everything intact and give us the clues spatially enough to keep the tension high and our interest set. 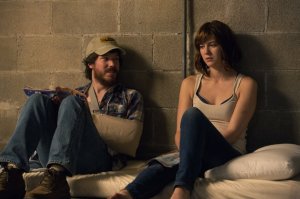 While the idea of how this and Cloverfield are connected will drive more causal viewers a bit crazy to find the connection, the more savvy internet folks, who have also been driving themselves crazy trying to figure it out, will find the scarps to try and put it together. However, it seems like one option is becoming a clear answer, but I obviously won’t ruin it here.

All in all, 10 Cloverfield Lane is a tension-filled, character-driven suspense thriller that with great performances by Mary Elizabeth Winstead, John Goodman and John Gallagher Jr. The ending will divide fans, especially with everything that happened before it, but it doesn’t take away from what we were given. With all the secrecy going around, do yourself a favor and enjoy the film for what it is.