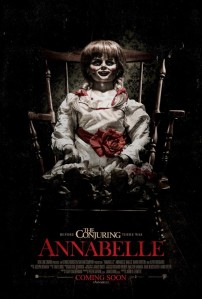 Synopsis: A couple begin to experience terrifying supernatural occurrences involving a vintage doll shortly after their home is invaded by satanic cultists.

Spin-off movies are always a crap shoot. They either work, they don’t, or are so-so, with Annabelle – the spin-off/prequel of The Conjuring – it is a mix bag. It should be noted that James Wan, who directed The Conjuring, did not direct this, and why it’s probably not that important to mention, he did produce it and left the job to his cinematographer of The Conjuring, Insidious 1 and 2, and Dead Silence, John R. Leonetti, who still does keep a bit of the same style Wan had in The Conjuring.

The movie starts off the way The Conjuring started, with the Debbie (Morganna May, who makes a blink and you miss it cameo later in the movie) talking about the strange occurrences she’s had with the doll. We then go back a year before those events and meet our characters in Mia (who is coincidently played by an Annabelle as well), who is pregnant at the start of the movie and her husband John (Horton), who is working on becoming a doctor. John gives Mia the doll as a gift to add to her collection but later in the night Mia hears the neighbors scream and then gets attacked by the cult members, one of them happens to be the infamous Annabelle Higgens, who gets killed and as seen in the ads bleeds on the doll and cue the supernatural.

Even when Mia and John move after having their baby, the supernatural happenings get more excessive and dangerous that they seek help from their priest, Father Perez (Amendola), and later Evelyn (Woodard), a local bookshop owner with her own past. Together they eventually find out what the demon attached to the doll wants and try to find a way to stop it.

Leonetii keeps the 60s and 70s-style vibe that James Wan is known for and approaches the movie in the same way with less-is-more. Creepy sounds like a creaking door, darkness, and all around building tension makes Annabelle nerve-wrecking to watch. Also, add in the fact that the Annabelle doll – which is not the way the actual doll looks due to rights issues – looks creepy as hell, doesn’t help either. The doll isn’t like Chucky because it doesn’t move or talk, but in a way that’s what makes it everything creepy.

The cast does the best they can do. Wallis does a pretty decent job of carrying the movie and once the baby gets involved you can feel her anxiety to save her child, which does play a major factor in the story. Horton’s husband character doesn’t really do much nor serves any real purpose in the movie other than try to play supporting husband. Amendola’s priest character has a moment to shine but is scenes are so far in-between that his character is easily forgotten sometimes, which is a shame since Amendola is a great actor. Another waste is Alfre Woodard, who is also dependable, kind phones in her performance here and almost feels like she’s only in the movie for that final act. Her character, Evelyn, barely gets fleshed out, and when she gets a little interesting they kind of rip it away from us.

You should have to remember the movie is set in the past, and the movie does remind us from time to time. Mia watches the news that is talking about Manson family, roll dial phones, and old baby carriages (a nice Rosemary’s Baby reference). There’s also the dynamic of Mia and John, with Mia the stay at home mom and John the working man, and very late nights which leads him to never be around when Mia is being haunted.

All in all, Annabelle does have some great scares but isn’t on the same level as The Conjuring. The cast does okay and the Annabelle doll is as creepier as ever.