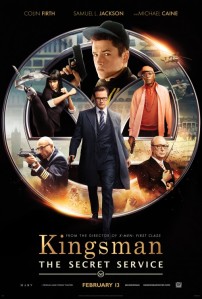 Synopsis: A spy organization recruits an unrefined, but promising street kid into the agency’s ultra-competitive training program just as a global threat emerges from a twisted tech genius

Director Matthew Vaughn once again adapts a Mark Millar graphic novel (previously adapting Kick-Ass) with Kingsman: The Secret Service. The movie brings a lot of the well-established tropes we have seen in other spy films form the past, but brings them in modern times and adds a highly stylized Millar and Vaughn-esque violence, cleverness, humor and cheekiness.

The films follows Gary Unwin aka ‘Eggsy’ (Egerton) who is good-hearted but a bit reckless, as he steals a car from a friend of his mother’s abusive new boyfriend and ends up in jail. He ends up getting out of it from Harry Hart aka Galahad (Firth) who turns out to be part of an elite group of operatives/modern-day knights known as The Kingsman. Harry sees the value and potential in Eggsy and sets him up to enter the training program to see if he is Kingsman material. Problem is, a wealthy tech magnate with a speech-impediment, Valentine (Jackson) and his razor-footed henchwoman Gazelle (Boutella) are ready to unleash a powerful weapon to start a new world order.

Again, Kingsman has a great sense of knowing what it is, but doesn’t get too tongue-in-cheek about it. It makes references to other spy films and non-spy-films but never beats you over the head with it or looks at the screen to let you in on the joke. Vaughn knows what he is doing and adds the combination of well known tropes and brings them into modern times with new technology. But, at the same time Vaughn knows how to have fun with the subject material and knows when to go over the top. Of course, it is based on a graphic novel so the hyper stylized violence is there – like it was in Kick-Ass and the sequel – so don’t be surprised when the violence or anything is a bit over the top. 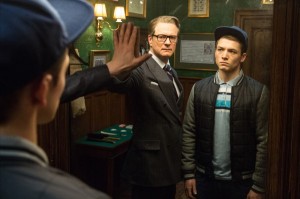 When it comes to the cast, well, they are what makes the film shine. Newcomer Taron Egerton brings equal parts of charisma, toughness, and vulnerability to ‘Eggsy.’ Whether it’s ‘Eggsy’ going though the crazy tests to becoming a Kingsman or dealing with bullies and his mother’s boyfriend, Egerton holds his own and arguably be a big star one day. He even holds his own with on-screen veterans like Colin Firth, Mark Strong and Michael Caine. Another newcomer to the scene is Sophie Cookson, who plays Roxy – another Kingsman recruit – also hold her own being the only female during the recruitment process and has her moments to shine.

Colin Firth plays Harry Hart aka Galahand (his codename), who, yes, has his moments to kick some major ass in the film. We know that it has become a trend in Hollywood now to give older actors a “restart” in their career to become action heroes after Liam Neeson did it so well in Taken. Firth plays Harry as the proper English gentleman that carries himself with the outmost prestige, but when it comes down to fight, he goes all out. Which comes into play in one of the biggest action sequences in a church (more on that later) and a standout one at that. I, and many others, would never have seen Firth as an action star, but he does pull it off here in Kingsman. 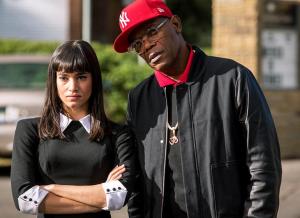 Samuel L. Jackson is really having fun playing Valentine. He gives him a lisp – which Jackson apparently actually had – and is a blend of recent villain and old school Bond villains. His main weapon is a technology-based one but he uses mountain-based secret lairs and has a lovely but equally lethal henchwoman that does all his dirty work, since he can’t stand the sight of blood, by cutting off people bodies parts with her razor-sharp prosthetic legs. Sofia Boutella plays said henchwoman named Gazelle (yes, her name is Gazelle) and beside the fight scenes holds her own with Jackson.

The other supporting cast is rounded out by Mark Strong and very small role by Michael Caine. Caine plays the head of the Kingsman and pops in and out of the film to fill us in and drive home some of the more important scenes. Strong plays Merlin, the man overseeing the Kingsman recruits and eventually helps out with the final act. It’s a shame there isn’t more of Merlin in the film because he definitely is a great character. Also, for comic book and nerd fans alike, Mark Hamill pops in for a small role too.

Now, I haven’t read the original source material so I don’t know if this particular scene is in the graphic novel or not, but Millar is known to push the boundaries in this work. The scene I’m talking about is the church scene that you can see in the trailers which involves Harry going at it with the churchgoers. Without going too much into spoilers, it is the first time Valentine uses his weapon and we see the full effect of it. Harry happens to also be effected and goes into full blown berserk mode, which shows how dangerous the weapon can be and how effective a killer Harry is. The basis of the scene is in question and could have some people talking. I don’t know really what to think about the scene. On one hand, the scene is a highlight action sequence (and in one take no less) and in the other, is the scene justified? Is Valentine just picking one random spot or is trying to prove something? Again, up for debate, but you argue that the scene is freaking great to watch.

All in all, Kingsman: The Secret Service is a ton of fun. It brings aspects of old spy films but brings them into modern times and flips them on their head. The cast and action to great to watch and overall it’s funny too. It won’t be for everybody and besides the church scene, there is another scene near the end that will make people laugh (I know my theater with me did) but it shows how far Valentine’s plan went. If you walk into Kingsman anticipating a good time, chances are you are going to get it. Also, there is a mid-credits scene which is a nice way to end the film. 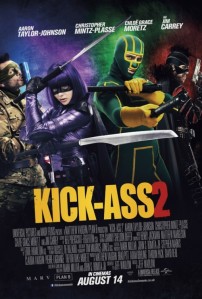 Synopsis: The costumed high-school hero Kick-Ass joins with a group of normal citizens who have been inspired to fight crime in costume. Meanwhile, the Red Mist plots an act of revenge that will affect everyone Kick-Ass knows.

*Review Note: This is a non-spoiler review as always. And if you want, stay after the credits for a quick scene.”

Kick-Ass was the little superhero movie that could. Shot on a relatively low-budget, introducing a comic-book character who was new, and featuring just one movie star in Nicolas Cage. The film nevertheless did something nobody thought it would do, get a cult following. Three years later we get a sequel that doesn’t have the same first-time charm the first had but still is a worthy sequel. The movie, like the first, isn’t just about normal people becoming superheroes but also about growing up and dealing with the consequences of their actions.

Mindy Macready aka Hit-Girl (Moretz) is now living her father’s former partner Marcus Williams (Chestnut) and is a freshmen in high school. Marcus tries to deal with the fact that Mindy can’t let go of her old life and all Mindy wants to do is be Hit-Girl and keep her fathers promise of protecting the city but also wants to make Marcus happy and do what he tells her. Marcus also wants Mindy to fit in at school which of course isn’t that easy for her.

Then finally there’s Chris D’Amico (Mintz-Plasse). Now donning an emo look and obsessing with getting revenge on Kick-Ass for killing his father. Chris with one of his family’s bodyguards Javier (Leguizamo) starts to put a team together that includes former convicts and killers. The standout of his evil super-team is Mother Russia played by Russian body builder Olga Kurkulina. Chris also has renamed himself “The Motherfucker.”

Meanwhile at the same time Dave aka Kick-Ass, now a high school senior, is bored with his life but at the same time wants something exciting to happen. Eventually, he pleas to Mindy to help him train and become a better fighter. After Mindy takes Marcus’ advice to stop being Hit-Girl, Dave finds himself wanting to team up and since he can’t have Hit-Girl he finds himself a group calling themselves Justice Forever.

They include a mob enforcer-turned-born again Christian Colonel Stars and Stripes, and his trusty sidekick dog Eisenhower played by Jim Carrey. The group also includes Dr. Gravity (Donald Faison), Night Bitch (Lindy Booth), Insect Man (Robert Emms) and a mother/father duo Remember Tommy. They aren’t Hit-Girl level superhero but Kick-Ass joins them anyways to help rid of the city of, as they put it, injustice.

Like I said before, Kick-Ass 2 doesn’t really have the same charm the first did. Probably because we didn’t know what to suspect in the first movie (unless you read the comics) and I’m not saying this is a bad thing. The movie works on its own levels and you really shouldn’t compare this to the first. The message is the same, the humor is still there, and violence is about to maybe a little more than the first. The one thing the movie does have more of is drama. With our main heroes Dave and Mindy having inner struggles to how they really are and having spats with their guardians – Mindy with Marcus and Dave with his father – the movie does slow down a bit so we can feel for the characters. We know who they are and what they can do but no one does.

We see Mindy falling to the pressures of high school and Dave taking responsibility for his actions as he becomes a man. It’s necessary but with the rest of the movie filled with violence and humor it makes the movie tonally a bit odd to take in.

The performances are stronger this time around with the main three cast members. Aaron Taylor-Johnson has some great comic timing and is a little more hands on this time around. Chloe Grace Moretz is better than ever as Hit-Girl. She shows and has the right combination of fearlessness and vulnerability. Christopher Mintz-Plasse goes through a complex journey if that’s what you want to call it. His character makes you both hate and possibly feel a little sorry for him.

The new plays are hit and miss but of course everyone will talk (and have been) about Carrey’s Colonel. Despite his wackiness and humor at times, he does give the movie a bit heart and soul in one particular scene. Wouldn’t say he steals the movie (some will and there’s nothing wrong with that) because I think that goes to Olga Kurkulina’s Mother Russia. She’s a force of nature almost and her fight with Hit-Girl near the end of the movie was definitely a standout.

All in all, Kick-Ass 2 is a ton of fun. If you liked the first movie then you will most likely like this one. It can even be described as a twisted coming of age story. Is the movie for everyone? No. But let’s face it a movie called Kick-Ass probably isn’t going to be for everyone.