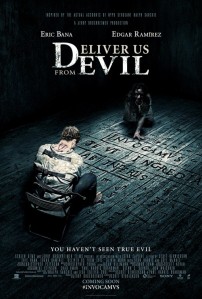 Synopsis: NY police officer Ralph Sarchie investigates a series of crimes. He joins forces with an unconventional priest, schooled in the rituals of exorcism, to combat the possessions that are terrorizing their city.

Based on retired NYPD detective Ralph Sarchie’s memoir “Beware the Night,“ (I have not read the book so I don’t know how faithful it is) Deliver Us From Evil follows Bronx cop Sarchie (Bana) as he investigates a series of grisly and eerie crimes that end up being connected by the supernatural. He eventually crosses paths with a Jesuit priest and exorcist Mendoza (Ramirez). Mendoza tells him that there is two types of evil, and the evil he’s dealing with is one that he should not underestimate. Sarchie however doesn’t believe Mendoza because, of course, everything can be explained. Sarchie also has a hard time believing in religion because he never got anything from it. This leads the two of them to down a dangerous path against a demon.

Scott Derrickson (The Exorcism of Emily Rose, Sinister), who has quickly become one of my favorite directors (and will direct Marvel’s Doctor Strange), gives the movie a nice mix of police procedural and supernatural thriller. The police material is great and for the first half of the movie, it’s all cop stuff with some supernatural aspects with the second half following more of the supernatural with some cop stuff. The good thing is that Derrickson does not give too much of the supernatural elements. He teases us throughout the movie but not enough to annoy but enough to keep us interested. That’s one of the things Derrickson does so well in his movies. It’s the slow builds that make the third acts in his movie worthwhile. Like his other films Derrickson manages to evoke gritty imagery and makes New York, more partially, the Bronx a character in itself.

The supernatural stuff is more or less of the same we’ve seen in other movies. It’s creepy, disturbing, eerie and sometimes gut-wrenching. But Derrickson already has a knack for directing the genre that it still creeps you out when it unfolds. The demon’s plot, might seem a little “meh” for people but once we find out what’s going on we are already invested in Sarchie’s character and everything else that it (at least to me) didn’t matter.

There are some things that might take some people out of it. Obviously for the sake of no spoilers I won’t write them, but considering this is a supernatural/demon/exorcism movie, it hopefully won’t throw people off that much.

As for the cast, mostly everyone does a pretty good job. One of the missteps is Olivia Munn’s wife character. It’s nothing against her and her acting but more dealing with her character being underwritten and really having nothing to do expect for two scenes. Surprisingly, and nothing against him because I do like him, Joel McHale gives a nice turn as a badass and Sarchie’s wise-cracking partner who has a thing for knifes.

Eric Bana is reliable as ever and plays Sarchie as the audience’s skeptical surrogate. And props to him, and the rest of the cast, for putting on strong New York accents but Bana gets the most props since he’s not even American. Next to Bana, the movie’s other highlight is Edgar Ramirez. Most exorcists in movies tend to be old men whose faith is either tested or being lost but Ramirez’s Mendoza is much more complicated than that. His past isn’t a bright one but it’s that past that makes him keep his life together. He drinks, smokes, checks out girls, and wears a leather jacket, but that doesn’t stop him from knowing what has to be done.

A special mention also has to be given to Sean Harris as the man possessed making Sarchie and Mendoza’s life hell (no pun intended). The character could have been laughable or just a character that stands in the shadows. It’s Harris’ intense performance alongside Bana and Ramirez’s that make the demon-battling scenes a little more give. The same is to be said about Olivia Horton’s Jane, which we’ve seen in the promotional material.

All in all, Deliver Us from Evil might be a little dull than the other exorcism movies but Derrickson manages to keep us invested with his powerful imagery. Add Bana, Ramirez, and Harris’ performances and it makes the movie a little stronger and much more than an exorcism movie.

Deliver Us from Evil

Synopsis: Based on the true story of Jordan Belfort, from his rise to a wealthy stockbroker living the high life to his fall involving crime, corruption and the federal government

*Reviewer Note: This will be a non-spoiler as always.  Also I want to apologize for being gone and not putting up reviews lately.  I haven’t had time to do any but I have been watching movies. *

Based on Jordan Belfort’s bestselling memoir of the same name, The Wolf of Wall Street recounts how, as a young New York stockbroker, Belfort (DiCaprio) made a fortune from selling penny stocks aka made a ton selling crap to suckers.  He later went on to start his own firm, Stratton Oakmont and made the leap to IPOs.  Belfort’s success, cunning, and penchant for excess earned him the nickname “The Wolf of Wall Street,” despite the fact that his firm was based in Long Island. (Belfort’s Wall Street days were, as the film shows, quite short-lived.)

Belfort started Stratton Oakmont as a boiler room, training some of his drug-dealing neighborhood pals to become brokers of penny stocks. Soon, the firm is pulling down the big bucks and expanding into a true force to be reckoned with. And with remarkable success comes extraordinary excess in every imaginable way, from sex to drugs (especially drugs) to material things.  We see Jordan slide from non-user to full-fledged raving addict.  His drug of choice being Quaaludes, but he also abuses cocaine and morphine.

Ultimately, Jordan’s wild and greedy ways cost him the women he loves, his livelihood, and his freedom when the FBI (led by Kyle Chandler’s agent) finally bust him.  The movie doesn’t necessarily condone all this bad behavior, and you feel a little bad rooting for a guy like this but he makes it looks pretty good.  However, Belfort never quite seems sorry for what he did. He seems more upset that he had to give it all up

But The Wolf of Wall Street is anything but a white collar crime movie.  The movie is also a great dark comedy.  It’s profane, vulgar in every conceivable way, and goes to the point of utter absurdity, but it freaky works.

Next to Leo’s performance which I’ll get to in a second, one of the highlights is Jordan’s business partner and pal Donnie Azoff played by Jonah Hill.  Donnie has big white teeth and a manic personality and while Hill is largely here as comic relief, there are a few vulnerable moments for his character near the end that reveal other layers to him.

Jon Bernthal has a small role as a drug dealer/middle man pal of Jordan’s, while Ethan Suplee, P.J. Byrne, and Kenneth Choi get lots of hilarious moments as some of Stratton Oakmont’s original team of brokers.  Best Actor winner Jean Dujardin has a small, but important role as a Swiss banker, while Rob Reiner is hilarious as Jordan’s ill-tempered dad “Mad Max,” an accountant who tries to be the voice of reason for his son when he’s not berating him over the bills he’s running up.  But its Matthew McConaughey who steals the show in his brief turn as Mark Hanna, the Wall Street broker who first hires Jordan and basically teaches him all he needs to know to be a scumbag and an untrustworthy stock broker.

One of the weakest elements is arguably the female characters.  The women are mostly eye candy or hookers (yes I said hookers, this movie is pretty crazy).  Margot Robbie is better than her role as Jordan’s second wife Naomi, aka the Duchess of Bay Ridge, probably deserves.  You can argue that she may actually love Jordon or she’s nothing more than a gold digger.  Jordan’s first wife, Teresa (Cristin Milioti), is sweet and probably could have been a real highlight but she disappears for a while when she comes back it’s really for nothing.

This film though belongs to DiCaprio.  He’s has the right balance of scummy and appealing, and he’s also incredibly funny.  He embraces the debauchery, greed, and recklessness of Belfort.  Is it his best performance? Arguably yes.  You can tell that DiCaprio is having fun playing and it’s a hell of a lot of fun to watch him play the role too.  Even if you feel a bit dirty at times watching him do everything he does, especially when drugs take its toll.

All in all, The Wolf of Wall Street is a great movie, although probably a bit long, but everyone involved from Scorsese and DiCaprio to supporting actors like Hill, McConaughey, and the behind-the-scenes team pull out everything they got.

The Wolf of Wall Street