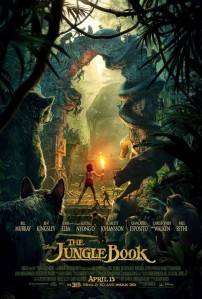 Synopsis: The man-cub Mowgli flees the jungle after a threat from the tiger Shere Khan. Guided by Bagheera the panther and the bear Baloo, Mowgli embarks on a journey of self-discovery, though he also meets creatures who don’t have his best interest at heart.

I know I’ve watched the animated 1967 film, but I don’t actually remember too much from it. So going into The Jungle Book, I went in pretty fresh, not knowing a ton about the story and how things would work out. Thankfully, Jon Favreau and the special and visual effects team did a great job of bringing Rudyard Kipling’s characters to life in a remarkable and effective way.

Loosely based on multiple versions of Rudyard Kipling’s novel, The Jungle Book follows Mowgli (Sethi), a “man-cub” raised by wolves lead by Akela (Esposito), and his “mother” Raksha (Nyong’o). However, Mowgli’s presences upsets the tiger Shere Khan (Elba), and asks the animals who live in the jungle is Mowgli is still worth keeping around and reminds them that he will grow up and older and become they thing they fear the most. Mowgli, wanting nothing to happen to his pack, decides that it’s time to move on and is lead out of the jungle by his friend Bagheera (Kinglsey), but Khan sneaks attacks them and Mowgli runs deeper into the jungle.

Along the way, Mowgli encounters different characters that’s he’s never met like the hypnotic snake Kaa (Johansson), the cunning and lovable bear Baloo (Murray), and gigantopithecus King Louie (Walken). His adventures lead Mowgli down a path to find out where he truly belongs, with man or the jungle, and face the dangerous Shere Khan.

Obviously, one of the big selling points for this iteration of The Jungle Book is the visual effects, and that’s not a bad thing. The visuals that director Jon Favreau was able to get out of everyone involved is phenomenal. The photorealistic approach to not just the environment, but the animals really brings you into the world that is being created. While some effects are blatantly visual effects, there are some moments that have you second-guessing. Yes, that’s how great the effects are, it makes you second guess. However, that might also be a problem because you’re wondering whether or not it’s real, partially real or full CG (no animals were used around Neel Sethi, but still). 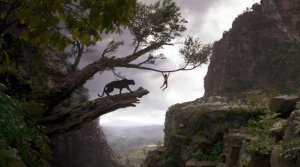 Besides the technical level success, The Jungle Book is also elevated by the great voice performances by the cast and newcomer Neel Sethi. Sethi is the only real non-CGI character in the film, and for his first movie, Sethi is able to handle himself pretty well, especially considering he was probably working off tennis balls or stand-ins, but even saying that, Sethi draws you in every important scene that he needs to. There are moments where he misses his mark, but not only is this his first movie, it’s also a movie where he is the only human character.

The voice casting is perfect of Shere Khan with Idris Elba. Elba already has the swagger and demeanor that demands respect, and every time Khan was onscreen you understood why the rest of the animals were afraid of him and Elba’s voice just makes it more powerful. Ben Kingsley’s black panther, Bagheera is the no nonsense teacher that tries to make sure Mowgli fits in with the pack and learns the ways of the jungle since he found him when he was a baby, and forget his “human tricks.” You can say that Bagheera is more of the father-figure to Mowgli, than Akela. Finally, Bill Murray seems like he was born to play Baloo. Murray injects The Jungle Book with his comedic and light-heartedness, and is so likeable you can’t help but laugh along with me. 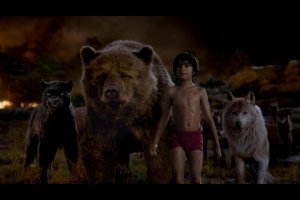 The rest of the voice cast like Lupita Nyong’o as Raksha, Mowgli’s wolf-mother has her real moment to shine when Mowgli decides to leave. Scarlett Johansson has a glorified cameo voice appearance as Kaa, in one of the darkest and creepiest scenes in the movie and Giancarlo Esposito’s Akela is, unfortunately, the loose-end of the voice cast, but that’s nothing against him, just the character not giving enough to do. Finally, Christopher Walken’s King Louie was mixed for me personally. In fact, his whole scene kind of takes the wind and good pace the film had and the middle of the sequence seems forced and out of place with the rest of film.

I’m also trying to imagine what the film looked like in 3D, but I assume it adds to the experience. I didn’t watch it in 3D, but just watching the film, I can only imagine they used the 3D pretty well with the environment they were given.

All in all, The Jungle Book is a great family film, despite some dark and maybe too intense scenes for kids, it also carries some messages that they can pick up on. However, the big positive out of the film is the amazing visuals, the great voice cast, and newcomer Neel Sethi. 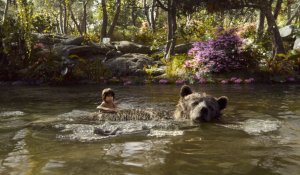