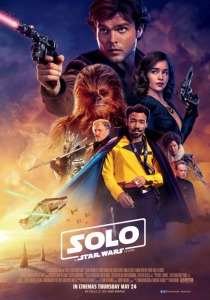 Synopsis: During an adventure into a dark criminal underworld, Han Solo meets his future copilot Chewbacca and encounters Lando Calrissian years before joining the Rebellion.

Solo: A Star Wars Story has had a troubled production to say the least. Phil Lord and Chris Miller, the duo behind the Jump Street movies and The LEGO Movie, were set to direct the movie and were almost finished with three weeks left. However, constant clashes with Lucasfilm head Kathleen Kennedy and writer Lawrence Kasdan throughout production finally hit a tipping point and they were fired, and replaced with Ron Howard. Then more reports came out, but I’ll let you search those on your own.

All that being said, the main question everyone had – after, Do we really need a Han Solo origin movie? – is whether or not Solo was going to be any good? Well, that all depends on whether or not you want to have some fun with the movie.

Solo opens on the planet Corellia, where we see Han (Alden Ehrenreich) getting into some trouble as he and Qi’ra (Emilia Clarke) try to get of the planet. Of course, they get separated, and Han swears to make it back, rescue her and live their lives far, far away. Cut years later, we see Han teaming up with a crew led by Tobias Beckett (Woody Harrelson) to steal some a valuable mineral for a criminal boss named Dryden Vos (Paul Bettany). The job eventually has them cross paths with Chewbacca (Joonas Suotamo), the charming and suave Lando Calrissian (Donald Glover) with his droid L3-37 (Phoebe Waller-Bridge), and a rival gang.

I have mixed feelings about Solo, I did not, not like it, but I also didn’t fully like it either. Against all odds, Solo is entertaining once you get pass the slow first act where it finally gets going and the action is picked up. Of course, it’s a prequel, so the sense of danger needs to be put on the backburner for the most part, like every other prequel out there, but at least the Kasdans tried to do some things to keep you on your feet.

When you look at it though, the movie rests on the shoulders of Alden Ehrenreich as young Han Solo, and surprisingly, he does a pretty decent job. Ehrenreich is relativity new to Hollywood as he broke onto the scene with now forgotten Beautiful Creatures, and had small roles in Stoker, Blue Jasmine and finally the Coen Brothers film Hail, Caesar! which won him the role here. I really have nothing bad to say about his performance, Ehrenreich has the charm and the devil-may-care attitude you would expect from Han Solo.

Then there’s the much anticipated portray of young Lando Calrissian by Donald Glover, and yes, he’s great as Lando. Glover, to no surprise, brings a cool and confident attitude to Lando, and the clash of styles between Lando and Han is great to watch. Although, if you pay attention enough, it does at times sound like Glover is trying his best Bill Dee Williams impression. The other highlight of the cast is that of Phoebe Waller-Bridge’s droid, L3-37. Droids always play a part in the Star Wars franchise, and most of the time it’s for comedy or a helping the main characters in a time of crisis. L3-37 definitely fits the bill here, but there’s something else with her character here, that I’m interested in seeing how people react to it.

The rest of the cast doesn’t leave too much of an impression sadly. Woody Harrelson’s Beckett is simply a man at the end of run as a criminal looking for that last big job. Paul Bettany’s Dryden is a lackluster villain, who is said to be vicious and deadly, and while one scene proves that and Bettany does his best with what he’s given, Dryden is rather forgettable in the pantheon of Star Wars villains.

Then there’s Emilia Clarke’s Qi’ra, who for me, is an oddity. The relationship between her and Han is believable enough for the movie, but there’s more to her character that we find out near the end of the movie that kind of comes out of nowhere. Obviously, this is a spoiler-free review, but where they leave her character along with Han is both curious, and for me, a bit frustrating.

Speaking of frustrating, as much as I was surprised by the movie’s entertainment value, Solo: A Star Wars Story is a tad frustrating when it comes other things it brings to the table. Again, removing the “is this movie really necessary?” from the table, Solo brings things we’ve heard about to the big screen, like the card game between Han and Lando, but for me the famous Kessel Run leaves a lot, and for me I mean a lot, to be desired. Moreover, the movie leaves some things too open for sequels for my liking, and yeah I know, sequels were bound to happen because it’s Star Wars, but I just couldn’t get behind it. Especially with that cameo that came out of nowhere.

All in all, Solo: A Star Wars Story is an entertaining movie once it really gets going. If you had any problems with The Last Jedi, you shouldn’t for Solo. Is a perfect or great movie? Not really. Will you be happy with the final outcome? Probably.

Synopsis: Facing threats to his kingdom and his family, Vlad Tepes makes a deal with dangerous supernatural forces – whilst trying to avoid succumbing to the darkness himself.

Dracula is probably, if not, the best known vampire of all time. His story has been told many times in the past and has always been connected to the historical figure Vlad ‘The Impaler.” Dracula Untold is no different. While, I have seen the character of Dracula as a somewhat tragic figure – having to live with immortality and the need to drink blood all the time – director Gary Shore’s movie tries to bring that to the forefront, but the way Shore goes about it was not the best way to go about it. It also doesn’t help that Shore also relies on CGI bats to carry an action scene.

The movie starts with a narration telling us that in the 1400s, the Turkish Empire stole young boys to fight in their army. Among them was Vlad (Evans), who become a legendary warrior for killing so many and for impaling them to wooden spikes. When the war ended, he went to live a quiet and peaceful life as Prince Vlad in Transylvania with his wife Mirena (Gadon) and son Ingeras (Parkinson). We then go to the Vlad and his men encountering what is Turkish Scout armor in a river but no sign of the actual men. It turns out that lived in peace with the Turkish Empire but soon a Turkish ruler Mehmed (Cooper) comes to claim the young boys from the castle, including Ingeras.

Vlad takes offensive to this and ends up killing the troop sent to collect his son. When he realizes he has sign his people’s safety, he goes to the mountains to make a deal with the Master Vampire (Dance). Vlad wants the power to protect his family and people but the Master Vampire tricks Vlad into drinking his blood to get his powers but with a catch: he has to resist feeding for three days to become mortal again, or stay as a vampire forever. 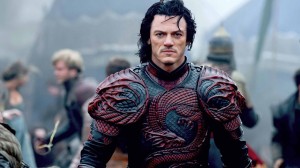 It’s hard to suspend some disbelief for the movie knowing how it’s going to turn out. And if you think that’s a spoiler than well I’m sorry. However, it’s the journey that counts, and for some parts, Dracula Untold did have some great moments, and I use some very loosely. Like I said earlier, I do see Dracula as a somewhat tragic figure, and the movie does try to play with that. Vlad isn’t a villain, although he has done bad things, he saw them as a way to stop more bad things from happening. All he wants his family to be safe and to live in peace, but is constantly reminded that he has done evil things and as a character says to him “you’ll always have that in you.” So it makes his decision to make a deal with the Master Vampire slightly understandable.

The meeting between Vlad and Master Vampire, I think is one of the best scenes in the movie. Despite the small amount of CG involved in the scene, it’s a great back and forth between two great actors in Luke Evans and Charles Dance. The scene involves a lot of mythology and starts to turn the movie into a fantastical territory. I also wish there was a lot more of it and sometimes it did feel a bit rushed but it serves its purpose.

Speaking of the acting, Dracula Untold belongs to Luke Evans. He gives Vlad the perfect amount of humanity to makes feel his suffering, but can also makes us a bit uneasy when he vamps out. Dance, although only having a couple scenes is terrifying as the Master Vampire. Sarah Gadon’s Mirena thankfully isn’t a forgettable character and actually serves some purpose to the story, although I wish she did have some more to do. Unfortunately, the always reliable Dominic Cooper fails as the villain and just shows up from time to time to remind us there is someone that Vlad has to kill.

Unfortunately, Dracula Untold does have many missteps. One of them sadly falls into what should, and could have been, a highlight of the movie. It’s when Vlad takes on a big group of soldiers on his own with his newly equipped superhuman powers. Instead we get a massive amount of shaky cam, CGI, and quick moments that really don’t allow you to enjoy it the way you’re supposed to. I don’t mind shaky cam as much as others do but the amount of it in the scene really bothered me. The other issue, even though it’s a small one, is the rules of the vampirism in this world are not established. Vlad seems to be able to go out during the day time, even in an overcast, as long as he doesn’t step into direct sunlight. Silver also bothers them but doesn’t necessary kill them and one character even attempts to use a wooden stack that seems to show some effect. Maybe it’s nitpicky but rules do need to be established.

The movie does have some cool visuals. The CGI bats, which are heavily advertise, are okay but the effect works better when Vlad uses them to disappear and reappear. Some shots look like cool screensavers and costumes are pretty damn impressive. Overall the movie does have a gothic feel and look to it, which is pretty welcomed considering Vlad is being presented as a somewhat dark superhero.

All in all, Dracula Untold isn’t a perfect movie but does have very few redeeming qualities to it. It also serves as the first movie in the Universal Monsters shared universe they are setting up. While it doesn’t totally feel like it was a complete setup, it is there. Out of the whole movie Evans and Dance’s cave scene is the best thing about the movie.