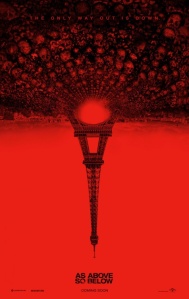 Synopsis: When a team of explorers ventures into the catacombs that lie beneath the streets of Paris, they uncover the dark secret that lies within this city of the dead

As Above, So Below is being advertised as another found footage horror movie, but as I sat there and watched it, it didn’t feel like a typical found footage movie, or even a horror movie. The movie feels more like a thriller and has bits of horror with the found footage aspect. Unfortunately for us, the movie fails at some levels but does have some redeeming qualities to it.

The movie follows Scarlett Marlowe (Weeks), who has made it her career to finish her late-father’s work; find legendary alchemist Nicholas Flamel’s Philosopher’s Stone. The stone is suppose to, according to Scarlett, “turn basic metals into gold and grant eternal life.” She gathers the help of a documentarian colleague Benji (Hodge), fellow archaeologist and former boyfriend George (Feldman) and some local thrill seekers Paillon (Civil), Souxie (Lambert) and Zed (Marhyar).

Scarlett, with the help of George, eventually find out that the stone might be held in some closed off portion of The Catacombs in Paris. The group heads down and of course, weird things start to happen. Of course being stuck in an isolated area like the Catacombs things like claustrophobia, confusion, darkness, creepy noise, scrapes and bruises occur that make the group uneasy continuing their adventure. They also need to confront their inner fears if they want to make out alive.

The movie, which surprised me, apparently got to film some of movie in the actual Catacombs, besides the big set pieces obviously, which is kind of cool. But the other big thing that sets this aside is the movie has the actors “film” it. The characters have mini-cameras attached to their headband lights so some of the movie is seen from their point-of-view, which adds to their suspense factor. This also makes the “why are they still filming all of this” argument become less of a problem since they need to light down in the Catacombs.

As Above, So Below already has the creepy factor in its set. The Catacombs is essentially a mass grave and could have been used in the movie more, but instead it is used more as a backdrop than its main attraction. The Philosopher’s Stone – which has been used in other movies like Harry Potter and Tomb Raider – is more of a MacGuffin and isn’t really that interesting as a plot device.

The movie though does have great sound design. Besides the obvious camera movements that make you know something is coming to pop at you, the sound design is the reason this movie is a bit unnerving and creepy. It’s the small creeks, crumbles, and random noises that raise your awareness and makes you nervous for the characters.

Thankfully, the movie has a descent lead in Weeks. She plays Scarlett as a bit obsessive about finding the stone, not just for herself, but also to clear her father’s reputation. She not as annoying as some of the leads in found footage movies, which for this is kind of movie is welcomed and she is somewhat likeable, when she’s doing things that are clearly wrong or life threatening.

Feldman as George is also descent, along with Hodge as the cameraman Benji. The rest of the cast is really just filler and at one point I forgot about a character and when he’s shown on screen I was surprised to see he was still alive.

But with all that said As Above, So Below does have a lot wrong with it too. I address the shaky-cam because there are moments when the camera does crazy, especially in the last ten minutes when everything goes to hell (no pun intended). It also falls into to some usual horror movie tropes, which isn’t necessarily a bad thing but it loses some of its effectiveness when you know it is coming.

There are also some things that are bought up that really go nowhere, and are just added in to add to the creepiness, which is kind of disappointing. The last fifteen to ten minutes is where everything gets chaotic and the movie seems to start fall into the unwelcomed. There are some creepy moments there but it then starts to follow the usual found footage beats, but with outcome that I didn’t see coming.

All in all, As Above, So Below has some creepy aspects and while it is a bit different from over found footage movies, it doesn’t bring anything new. It also at the end of the day doesn’t make a huge amount of sense but it is a supernatural horror movie and has a descent lead in Weeks, that it could make a serviceable weekday movie if you nothing better to do.

As Above, So Below