Synopsis: A former neurosurgeon embarks on a journey of healing only to be drawn into the world of the mystic arts.

*Reviewer Note 3: I do think the best experience of watching the film is in 3D. I know the extra ticket price and 3D in general might be a pain, but I think it’s worth it to gain the full experience.*

It feels like the last three years, Marvel has released films that everyone has either doubts about or feels like Marvel is taking too big of a risk. First it was Guardians of the Galaxy, then Ant-Man, and this year is Doctor Strange. And of course, every year those doubts are proven wrong. Not only is Doctor Strange another great addition to the Marvel Cinematic Universe, it truly is unlike anything Marvel has ever done onscreen.

The film follows Doctor Stephen Strange (Cumberbatch), highly popular but arrogant surgeon whose life gets turned upside when he’s in a sudden car accident that severely injuries his hands. When he runs out of options to gets his hands better, he heads to Nepal to search for someone that could potentially cure him. That person is The Ancient One (Swinton), who then reveals to Strange that her way is through the mystic arts. While Strange is learning things he never thought were possible, an old student of The Anicent One, Kaecilius (Mikkelsen) is trying to open a portal to The Dark Dimension and summon a dangerous entity in Dormammu.

Like the previous films I’ve mentioned, Doctor Strange was a risk for Marvel since not many causal movie fans will know who Doctor Strange is, but more importantly, the film is adding something and putting front and center in the MCU: magic. The interdimensional aspect of the film only works because of director Scott Derrickson. He was able to bring some really great and awesome looking visual effects that I’ve rarely ever seen on film. It also helps that Derrickson has worked in horror, because you can see that in some of the shots, especially when the Dark Dimension comes into play. You will definitely walk away talking about the visuals of Doctor Strange. Also, for a film that delves into magic quite a bit, I was surprised how much hand-to-hand combat there was in the film. Not complaining, just an observation.

When it comes to the film itself, Doctor Strange does feel familiar in terms of what we’ve seen before from Marvel in the way of an origin story. We see the arrogant and egotistical character on the top of his game when suddenly something tragic happens and he’s having a self-made crisis until he has to rise to the occasion and prove himself. Of course, it’s always nice to see those stories play out, and Doctor Strange does enough to make that formula work for it, instead of against it.

Benedict Cumberbatch is pretty much perfect as Doctor Stephen Strange. He finds the right balance of arrogance and likeability to keep us invested in his story until the very end. However, one of the big highlights – cast wise – is Tilda Swinton as The Ancient One. “White-washing” controversy aside, which never made sense to me because it’s Tilda Swinton, she almost steals the show every time she’s onscreen. She also has her own balance of being a mentor, but someone who must keep her distance from people because of the responsibly of being the Sorcerer Supreme.

Chiwetel Ejiofor’s Mordo has his own history before the film that is hinted at, but is a by-the-books kind of warrior that teaches Strange along the way. Benedict Wong’s Wong is another highlight of the film, although I wish we had a little more with him. When it comes to Mads Mikkelsen’s villain Kaecilius, I’m sure many will see him as another underdeveloped villain that doesn’t fix Marvel’s villain problem. I wouldn’t be doing a good job of a reviewer if I didn’t agree with that to some extent.

Kaecilius doesn’t see himself as a villain and that usually makes the best kind of villains. Everything he does he thinks is for a grander purpose and makes a sound enough reason for his actions when he goes face-to-face with Strange, something even he points out that sounds good in theory, but in action not so much. However, the thing that keeps us invest in Kaecilius’ story – even for a moment – is Mikkelsen, who is always great in everything he does, and the same can be said here. But, it would have been nice to spend more time with him, and even see just a bit on how he became the way he becomes onscreen instead of just being told.

One of the biggest cast missteps is Rachel McAdams’ Christine Palmer. There’s no denying McAdams is a great actress, and anytime she’s in something you know she’s going to give one hundred percent. However, here, she entirely wasted. Palmer doesn’t add much to the story. She does have one key moment before the final act of the film, but that is about it. Although, many probably won’t know him too much, Michael Stuhlbarg pops in the film as Dr. Nicohemus West, a character from the comics, and somewhat rival to Strange, but it’s nothing more than a lesser supporting role.

All in all, Doctor Strange is truly unlike anything Marvel has ever done before in terms of visuals and the “out there-ness” of it all. While the film does have some familiar beat-for-beat origin story Marvel moments, and loses just a bit of steam in the final act, Benedict Cumberbatch and Tilda Swinton keeps us invest from start to finish. 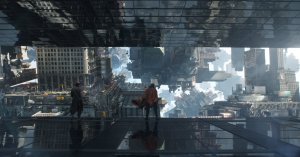 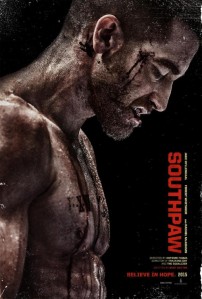 Synopsis: Boxer Billy Hope turns to trainer Tick Willis to help him get his life back on track after losing his wife in a tragic accident and his daughter to child protection services.

Everyone loves a great redemption story and director Antoine Fuqua with first-time feature film writer Kurt Sutter (FX’s Sons of Anarchy) have bought just that to us with Southpaw. The film goes through the motions and even hits the usual clichés we see in usual comeback stories, but it’s the performances by lead Jake Gyllenhaal and the direction of Fuqua that keep the movie enjoyable and powerful.

The film starts with Billy “The Great” Hope (Gyllenhaal) beating a boxing opponent retaining his victory record. When doing press, an up-and-comer boxer Miguel ‘Magic’ Escobar (Gomez) taunts Billy saying he wants a shot at him. However, his wife Maureen (McAdams) worries about Billy and tells him he should take a break and spend time with her and their daughter Leila (Laurence). Billy considers it, but Escobar continues to taunt Billy at a gala and the two go at it. In the chaos, Maureen gets shot and dies leaving Billy alone and going on a tailspin that eventually ends up with Billy losing everything and putting Leila in child services.

However, not wanting to lose his daughter, he slowly tries to clean up his act and goes to a local gym that is run by a former boxer, Tick Willis (Whitaker), who reluctantly agrees to let Billy train at the gym. Eventually, Billy gets a chance to get back in the game and possibly get Leila back if he takes on one huge fight.

One of the things that bothered me, as well as others, is the fact that the first trailer gives away that McAdams’s Maureen dies. It’s one of the pivotal plot points in the movie and essentially starts off the real story of Billy’s rise after everything is taken from him. It probably would have been hard to get around it, since it does happen early in the film, but it did take away a little bit from the scene, especially even more, because the actual scene is really strong. Also, if you go in thinking to see a lot of boxing action in Southpaw, you’ll probably be a little disappointed. There is some great boxing action in the film, which I’ll get to in a little bit, but Southpaw is a drama through-and-through. In fact, it is a bit hard to watch sometimes. Not because it’s bad, but because Billy is constantly having to push through both physical beatings and emotional beatings. If Sutter was trying to prove how resilient Billy is as a boxer and a person, he succeeds for the most part, although it takes some time to get to that point.

However, the only reason is works is because of Jake Gyllenhaal’s performance. Make no mistake, this is Gyllenhaal’s movie and is one of the only reason the film works so well. Gyllenhaal has pulled out some great performances as of late and Southpaw is no different. He is able to bring out every emotion in Billy that makes us sympathize, root and even relate to him.

The rest of the cast is hit-or-miss. Forest Whitaker’s no-nonsense Tick Willis is tail-made for the actor and nails every scene he’s in, with a standout scene near the end of the movie. Rachel McAdams, who doesn’t have a ton of screen time, still manages to bring a nice mix of charm, attitude, and toughness to Maureen. Oona Laurence’s Leila Hope has her moments to shine, but is otherwise an outside driving force to Billy’s actions throughout the movie. However, make no mistake, when she’s onscreen, it is great to see – in a non-creepy way.

“50 Cent” plays a greedy and morally questionable manager who you’ll love to hate, but think “yeah, this kind of guy probably exists in real life.” Miguel Gomez as Escobar pretty much disappears through the middle of the movie, and only pops up at the end of the movie for the unavoidable final fight of the movie. It’s no fault to Gomez, he’s only doing the best he can with what he’s given. The movie isn’t about him, it’s about Billy and his road to redemption. Unfortunately, Naomie Harris gets the short end of the stick playing a social worker assigned to Billy and Leila’s case. Harris does okay, but an actress of her talent and caliber being reduced to a small supporting role kind of sucks.

Like I said, Southpaw is a drama through-and-through, but the boxing scenes are great to sit back and enjoy. Fuqua really tries to put us the viewer in the ring with the characters and what is going in their head. The boxing scenes feel almost raw and brutal and are probably some of the best scenes in the movie, camera-work wise.

All in all, Southpaw feels like a familiar structure and fits into some clichés and common threads in other redemption/underdog films we’ve seen in the past. However, Jake Gyllenhaal’s performance and Fuqua’s direction in some of the bigger scenes make the film pop and standout in its own right. Southpaw may not the easiest movie to sit through, because of the drama, but it is highly enjoyable at the end of the day.